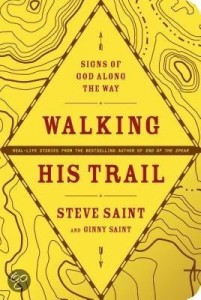 eview by David Nisley   •   “Some people say we live in a world of irreconcilable differences. Others say that true peace, lasting peace, can’t be obtained because we haven’t found a way yet to change the human heart.”

Those are the first lines in End of the Spear, a docudrama about the people whose lives were drastically changed through Operation Auca. In 1956, five American missionaries were killed by the Waodani tribe, the very people the missionaries were attempting to share the Gospel with in Eastern Ecuador. The story of Nate Saint, Jim Elliot, Ed McCully, Pete Fleming, and Roger Youderian has been shared before.

But Walking His Trail offers a new chapter, telling the story of a boy who lost his father and chose love over bitterness. This is also the story of Mincayani, one of the tribesmen who took part in the attack on Steve’s father.

This is a story of everlasting love, forgiveness, and faith.

It’s a memoir as much as a sequel to any of the other books and movies about the Waodani people. Through stories written in an easy-to-read, conversational style, Steve goes beyond his childhood in Ecuador. Years later, he returns with his family at the request of the tribe’s leaders. Those experiences lead to the establishment of a nonprofit organization dedicated to assisting the “hidden church” on its journey toward independence and maturity.

I was introduced to the unique relationship of Steve Saint and Mincayani when they visited my high school years ago.  But the encouraging honesty of Walking His Trail served as a catalyst to better understanding the scars of sacrifice and the beauty of peace that passes understanding.

A better summary might be found in this quote by Jim Elliot: “He is no fool who gives what he cannot keep to gain that which he cannot lose.”

During this pandemic, in addition to hosting services in-person each Sunday at 10:00 AM, we are also broadcasting live. Visit the links below and subscribe.

HOPE Kids has resumed meeting on-site as well on Sunday mornings at 10:00 AM. Classes are offered during the Sunday morning service, with special precautions to ensure families’ safety.

HOPE Youth has resumed meeting on-site on Sunday evenings from 6:00 to 8:00 PM, with special programs for Middle School and High School students.